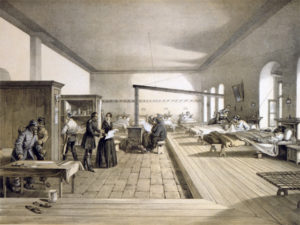 In the 19th century the course was set for the creation of the profession of nursing. The professionalization of nursing, according to Hilde Steppe (1997), is linked to the existence of a planned and organised training course combined with payment for the execution of this activity. As this process of the implementation of a specific qualification model was significantly influenced by external factors, she speaks consistently of the construction of an occupation.
The development of nursing as a profession in the 19th century, in which context the founding of Jewish nursing associations should also be seen, is the result of various influencing factors and power constellations of that time:

Industrialization
Industrialization caused a separation between work and family life, a separation between the public and private spheres. This separation was at the same time organized on a gender-specific basis; in the middle classes the woman was responsible for the running of the home, the man was out of the house and was responsible for feeding his family. (This is sometimes still valid today). Naturally this model could not be maintained in working-class households as the women had to work outside of the home in order to assure the support of the family. The impoverishment of the proletarian class led, finally as a result of poor living conditions, to the occurrence of epidemics (e.g. cholera). This led to overcrowding and overstretching of hospitals in individual cases.
Back to the middle class family: There the image of the woman was defined by her role within the household and family. As a wife, she should support her husband, as a mother bring up and take care of the children. Now, quite practically, nursing training could be built up on the basis of this real “job”. Nursing as a choice of employment was supported by the fact that interested educated middle-class women in the 19th century had no access to university. Nursing was the alternative to medicine and at the same time, preparation for the “real purpose” of a woman.

The enforcement of national constitutional interests through warfare

The many wars in the 19th century each led to advances in the development of nursing. The necessity for the organization of an effective medical service was made clear as a result of these wars. It became clear that nursing care made a significant impact on whether a battle was won or lost. Through her efforts during the Crimean War (1854), Florence Nightingale was deeply impressed and, on her return to England, could establish a modern nurse training program. The Swiss business man and social activist Henri Dunant should also be mentioned in this context. The Battle of Solferino made such an impression on him that he initiated the founding of the International Committee of the Red Cross. In times of peace, staff were to be trained so that they could take over the care for the wounded in case of war. The patriotic “[…] women’s associations” which had, in part, been in existence since the beginning of the century, “turned their activities towards serving within the Red Cross.” (Hummel 1986, p. 18).

The feminist movement
In most European countries around the middle of the century, feminist movements made up of differing groupings sprang up almost simultaneously. The feminist groups can be divided into the moderate middle-class movement, the radical middle-class movement, the denominational and the social democratic-communist movement. Each had different targets: the right to work, the right to education or the right to co-determination within the church or politics were issues in the foreground, depending on the self-definition of each group.
The moderate middle-class women were by far the largest group and for them the central issue was the debate about middle class women going to work. They demanded that women be allowed to work outside the home, however, within a “naturally” predetermined framework. Ultimately, according to Hilde Steppe (1997), this meant the transference of familial structures into public life, so typical female tasks such as caring or raising children, should thereafter be performed as jobs in public life. The radical middle-class women, on the contrary, held the view that women had a right to the same general education (as men) and access to all types of jobs and training schools, in addition to political equal rights by means of women’s suffrage. For the nursing professions, “[…]” above all the >moderate middle class< feminist movement was of significance in that their ideas of female professions was/is, for the most part, consistent with the emerging self-perception of nursing” (Steppe 1997, S. 42).

Developments within medicine
In the 19th century, as a result of medical advances, the old hospital which was a place to keep the destitute sick, old and fragile people became a medical centre intended only for the sick. Through this rapid course of development which went hand in hand with the self-definition of medicine as a science, the hospital became attractive to well-to-do demographic groups. Also the doctors, who up to then had not paid much attention to the old hospitals, saw in the new hospitals an opportunity for research and teaching. They no longer demanded only religiously affiliated nuns or “attendants” (proletarian, non-educated women and men); rather, they needed educated women, who could ensure the necessary support in the absence of the doctors. Medicine became more specialized in the subjects that we take for granted today. Based on the scientific paradigm, tremendous advances took place, e.g. in the research of infectious diseases.

Which forms of organisation developed then as a result of these power constellations?
Roughly speaking there were four large groups of nursing associations which differed from one another. There were the Catholic nursing orders that came to Germany via France and the occupied territory to the west of the Rhine at the beginning of the 19th century and soon spread throughout the whole empire. The next large group were represented by the organisations belonging to the Protestant Diakonie. Discussions had already begun in the twenties but only in 1836 did this lead to the founding of a Diakonie institution in Kaiserswerth. Their founder, Theodor Fliedner, adopted part of the Catholic model, the insularity and the charitable Christian concept of nursing. On the other hand, the orientation based on the middle-class family model is hard to miss: the theologian (father) and the hospital matron (mother) at the top, below the “children” (deaconesses) who are provided for – all living in one house. This motherhouse system is a typical German development, combining social security with personal bondage. It was also adopted by the Red Cross, which represented the third largest grouping. Also Jewish nursing associations organised themselves along the motherhouse concept (Steppe 1997). The fourth group which should be mentioned are the free, unaffiliated nurses who no longer wanted to work being attached to the motherhouse. Agnes Karll, a former Red Cross sister founded the Berufsorganisation der Krankenpflegerinnen Deutschlands (B.O.K. D.), the Professional Organisation of Nurses of Germany in 1903. This step took place in close contact and with the support of the middle-class feminist movement. At the end of the nineties in the 19th century, the first independent unions for nursing organisations were formed (cf. Wolff/Wolff 1994).
The following table shows an overview of the development in absolute numbers within nursing:

How and through whom was nursing content defined?
It was not nurses who defined what was to happen in hospital; the enormous expansive field of medicine had need of a adequate supply of good nurses who could stand in for doctors while they were absent from the patients’ bedside. The demands for nurse training that was independent of religious orders and involved insights into medical findings grew. This development was reinforced through the introduction of health insurance law within the framework of social legislation in 1883, which involved an increase in hospital beds and patient numbers. Also there were demands from the feminist movement for training. This would extend beyond the “natural purpose” of women. The conditions for a job that, in addition to payment, offered training which was required to impart special knowledge, skills and experience, did not yet exist in the 19th century. Only at the beginning of the 20th century, with the first nursing care legislation in 1907 was an important step made in this direction. Previously there had been only regulations within the individual motherhouses with regard to certain training material. (Hummel 1986).

All the forces described above also influenced the formation of the Jewish nursing associations and led to their specific development.