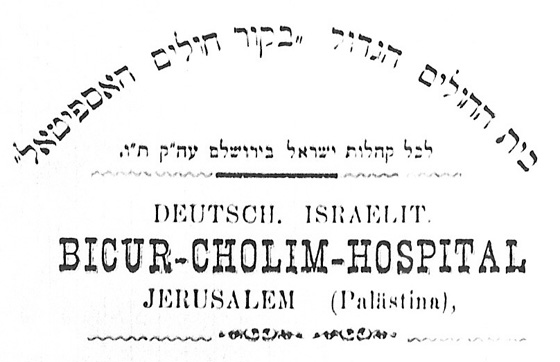 What does „Bikkur Cholim“ mean?
Whoever searches for the origins of Jewish nursing, encounters the Hebrew term “Bikkur Cholim” – visiting the sick. If a member of Jewish community attends to the needs of a sick person, several commandments of the Tora are fulfilled at the same time. Visiting the sick cannot be separated from the commandment to love one neighbor as oneself (Lev. 19:18, see also Lewkowitz 1987) which is a holy duty (Mitzwa) for all Jewish believers. This ministration is not limited only to Jewish persons, but also to non-Jews. And so, after the dissolution of the Jewish ghetto is Frankfurt the Jewish hospitals were open to all confessions.

In Germany Jewish nursing always existed parallel to Christian nursing (and later Islamic and inter-cultural nursing). In the crowded living conditions of the European ghettos in which the Christian majority forced their Jewish neighbors, self-help regarding illnesses and prevention of contagious diseases was unavoidable (essential?). When the establishment of a Jewish ghetto in Frankfurt was ordered in 1462, the first Jewish hospital was founded. Centuries later Jewish nursing history was ended through the organized destruction of National Socialism. As the nursing researcher Hilde Steppe emphasized in her classic text on Jewish nursing history, “the high significance of visiting the sick is derived from the many references to the practice in the Talmudic writings.” (Steppe 1997:82f.) Therefore, no blessing (Bracha) is necessary before carrying out Bikkur Cholim (Ahren 2001, see also Probst (Hg.) 2017).

On the occasion of the dedication of the new hospital of the Israelite Community in Frankfurt in 1914, Dr. Wilhelm Hanauer explained the origins of the Jewish tradition of visiting the sick as follows: „ At the time of the temple (old Israelite sacred site in Jerusalem, B.S.), in many cities pious brotherhoods, Chaberim, existed in many cities, who, in addition to care of the poor and burying the dead, practiced nursing care. These brotherhoods are perhaps the precursors of the Chewra Kadischa (burial societies, B.S.) which exist in almost all Jewish communities today. While the men’s organisations cared for men, women were cared for by women’s associations. Bikkur Cholim is not limited only to care of the body and cleaning the sick room. “One should also influence the patient emotionally, distract and comfort the patient, and pray for the patient’s recovery. It was also the tradition to pray for the sick in the synagogue (ebd). According to the influential “Schulchan Aruch,” who was the first to make the printed handbook of the Rabbi Josef Karo available (in Venice, 1565) and who wrote a commentary on the Jewish book of law, the Halacha, care of the sick also mean offering material support to the needy patient.

Bikkur Cholim and intercultural nursing
Oberserving the Jewish holidays and preparing foods in the Koscher manner are aspects of Jewish nursing. Nearly every Jewish hospital had, and has, its own synagogue. Larger institutions required their non-Jewish staff to work on the Sabbath. (…). Based on the autobiographical accounts written by Thea Levinsohn-Wolf, who emigrated to Egypt during the Nazi-era, we have access to a lively insight into the nursing ethic of the Jewish hospital in Alexandria. “…it was our intention to run the hospital as we were accustomed to in the hospital of the Jewish community in Frankfurt am Main: high medical standards, personal warmth and understanding toward the patients, willingness to help each other and cooperate on behalf of the whole staff for the good of the patient, treatment of every needy person who knocked at our door, no matter the color of their skin or their nationality, whether rich or poor, Jew, Christian or Arab.”…”We had our own Rabbi who primary responsibility was to administer to the dying, to pray with them, to accompany the deceased through the ritual washing through to the point of their burial. Of course, every ill patient could request a priest from their own religion. In this way we came to know priests of all religions. We welcomed them all with the reverence due to them. (Levinsohn-Wolf 1996, pp. 38 and 40). The Jewish diaspora and experiences of migration placed Bikkur Cholim at the forefront of intercultural nursing. Up to the present day the staff and the patients come from many different countries and regions; their religious and political points of view are manifold.

Current significance of Bikkur Cholim and Jewish nursing in Germany
As anti-Semitism grew during the socio-political upheavals in Eastern Europe beginning in the 1990’s, some 100,000 east-European Jews have immigrated to the Federal Republic of Germany as refugees (a certain contingent of immigrants was set by the German government). As the Jewish communities grew or were newly founded Chewra Kaddischa and Bikkur Cholim initiatives were formed in many towns and cities. No new Jewish hospitals have yet been opened (as of 2009). Only the Jewish hospital in Berlin was not destroyed by the Nazis and celebrated its 250th anniversary in 2006. Also in Frankfurt on Main Jewish patients must still rely on municipal and Christian institutions for nursing care. Contact persons in Frankfurt are Bikkur Cholim, a sub-group of the traditional burial brotherhood Chewra Kadischa.
Outside Germany hospitals bear the name Bikkur (or Bikur) Cholim, like this one in Jerusalem. Thus the Jewish tradition of visiting the sick is continued.