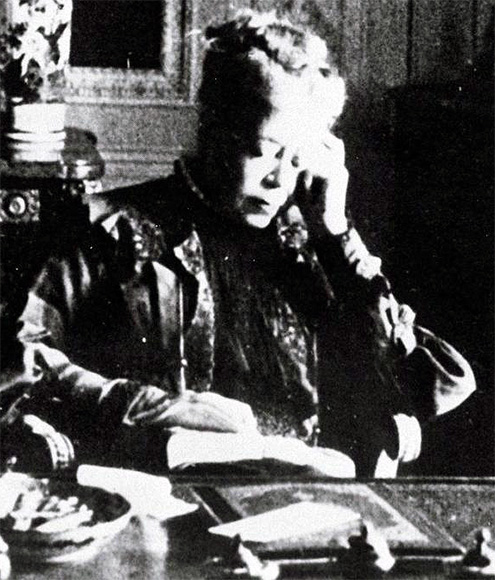 In 1902 and 1903 the foundresses Mathilde von Rothschild and Minka Goldschmidt-Rothschild laid the financial and legal foundation for two retirement homes that met the needs of single elderly Frankfurt women. These “Women Projects” concerned different target groups: The widow Mathilde von Rothschild, committed to the conservative-religious branch, opened her former residential mansion in the city center for female religious faith comrades of bourgeois origin who, like her, came from long-established Jewish families in Frankfurt. A separate article reports about her daughter Minka who founded Rothschild´s Residential Home for Ladies, a residence for low-income elderly female tenants of all denominations. The third person who sponsored these projects was Minka’s sister Adelheid de Rothschild who had married and moved to Paris. Mathilde von Rothschild and her daughters dedicated the foundations to the memory of the deceased husband and father Wilhelm Carl von Rothschild.

After her marriage in 1849 Mathilde and Wilhelm von Rothschild initially lived in the family mansion in the road formerly known as Prachtstrasse Zeil 92 (old house number 34), before they moved into a new mansion in Grüneburgpark. The Rothschild-Palais on Zeil, “[…] where the blessed Baron Anselm von Rothschild had lived a life of piety and the blessed Baron Wilhelm von Rothschild was incumbent on his pious studies” (quoted by the Statute of Rothschild´s Retirement Home 1907, page 3), became a Jewish Retirement Home for Women. The foundation was established on 27th March 1903 by Mathilde von Rothschild with the collaboration of her daughters Adelheid de Rothschild and Minka von Goldschmidt-Rothschild, who died shortly before the official approval which was granted on May 13, 1903. The home, to which the house at Liebigstrasse 24 was also attached, opened in the same year and offered room for 25 people. “The purpose of the foundation was granting a secure home for single Jewish women of higher classes with an immaculate lifestyle in exchange for payment which did not exceed the real costs” (Schiebler 1994:119). Like the foundresses themselves most of the residents came from old established Jewish families of Frankfurt´s ghetto time.

Despite her energy and organizational skills Mathilde von Rothschild was not part of the Foundation Board which was exclusively made up of men (possibly limited due to the Prussian law of 1850 governing organizational affairs prohibiting the membership of women in parties and organizations which was not repealed until 15th May 1908).. However, she secured broad powers for herself, for instance as the honorary president. , the last decision in questions concerning the association and the determination of her successor. In accordance with the statute “a member of the family of Baron Wilhelm Carl von Rothschild should always lead the honorary presidency, but female members should always have preference over the male members” (quoted by the Statute of Rothschild´s Retirement Home, page 7). After the opening of the retirement home, the widowed foundress, single like the residents, took up her residence there again: “Baroness Mathilde von Rothschild has reserved for her person to use the three rooms at the front side of the ground floor, the rear building as well as one basement department” (see page 6). Due to the poor sources it is not known what the communication between the foundress and the residents was like. About the staff and the interior decoration not much is known either. A note in the December 1933 edition (issue 4) of Frankfurt´s Jewish community newsletter (page 152) documents that the seniors felt in good hands: “On 1st December Miss Adelheid Stiebel […] could celebrate her 80th birthday in good health and mental acuity.” The widow Johanna Herzberg, whose daughters lived out of Frankfurt, had lived in Rothschild´s retirement home since 1930. Another resident, Karoline Bing, could flee from Nazi-Germany in 1939.

There is also little to find out about the employees of Rothschild´s retirement home. One of them was Judith Allmeyer, who worked there as a cook in 1936/37. Since 1917 Jenny Hahn (born in 1898), daughter of a cattle dealer in the Hessian community Birstein, had worked at the retirement home. Her biography was connected with the institution, where she used to live herself, and whose administrator she became in 1930. After her emigration attempt in 1939 had failed due to the beginning of the war, she held this leading position until the home was forcefully dissolved by the national socialists. On 24th September 1942 Jenny Hahn was deported from Frankfurt to Raasiku (Estonia), where she was most likely murdered. On the initiative of her niece Marianne Ockenga the artist Gunter Demnig laid a “memorial marker” (small “stumbling block” in the shape of a plasterstone) with Jenny Hahn´s picture at her place of activity on 4th June 2011 (cp. http://www.stolpersteine-frankfurt.de/dokumentation.html [24.10.2017].

After the death of her mother Mathilde in 1924, her only living daughter Adelheid de Rothschild supported the Jewish residence for female seniors inside the former Frankfurt family palais from Paris and provided assistance through the economic time of crisis; among other things she made a large donation of RM 500,000. When the faithful foundress died in 1935, her three children and heirs Miriam Caroline Alexandrine von Goldschmidt-Rothschild, Maurice Edmond Karl de Rothschild (both of Paris) and James Armand Edmond de Rothschild (London) took charge of the continued existence of the retirement home during the NS-period. They had regular reports given on its fortune. In 1938 Dr. Salomon Goldschmidt, Leon Mainz, Manfred Schames, Moritz Wallerstein and Max Wimpfheimer were members of the Foundation Board; in October 1939 Ludwig Hainebach, Leon Mainz, Martin Moses, Moritz Wallerstein (meanwhile Amsterdam) and Gustav Zuntz (cp. ISG Ffm: magistrate records sign. 9.621). On 27th September 1940 Rothschild´s retirement home was forcibly incorporated into the Empire´s association of German Jews, which had been established by the NS-authorities.

According to the report of the Gestapo officer at the Jewish welfare, Ernst Holland, the eviction of the residents of Rothschild´s retirement home took place between 1st July and 30th September 1941. “The residents were transferred to different retirement homes, primarily to the retirement home of the Jewish hospital […]. In order to increase the possible occupancy rate, the prayer room was closed and changed into a sleeping room” (quoted from Andernacht / Sterling 1963:471). The administrator Jenny Hahn accompanied the frail senior women to the Hospital of the Jewish Community on Gagernstrasse. The last remaining Jewish hospital in Frankfurt, which was not prepared for these changing requirements, had to maintain a geriatric unit at NS-behest. However, what happened to the now “Aryanized” Rothschild-Palais on Zeil in the meantime? “The main command post and the station of the police authorities dealing with homeless people were located in the house from 1942 until its destruction (by air-raids, B.S.) in 1944” (Nordmeyer 1997, part II, page 5). In 1949, four years after the end of war, the City of Frankfurt am Main handed the property Zeil 92 over to the responsible Jewish organization JRSO (Jewish Restitution Successor Organization Inc.); in 1952 it was sold to the “Hansa” department store (then “Hertie” and “Karstadt”). So far no memorial plaque has been put up commemorating the former Rothschild´s retirement home for Jewish women.

Inquiries in the internal data base of the memorial place Neuer Börneplatz of the Frankfurt am Main Jewish museum revealed that at least 20 aged individuals, who had been residents of Rothschild´s retirement home, were deported to Theresienstadt and other concentration and extermination camps. Some of these residents, also men, had been provisionally accommodated in Rothschild´s retirement home by the NS-authorities and finally “distributed” to other “retirement homes” (ghetto houses) in Frankfurt or the hospital on Gagernstrasse (cp. ISG Ffm: national register [“Hausstandsbücher ”] of Gagernstrasse 36 (part 2): Sign. 687). Of these people Bella Ackermann, Rosa Cahn, Sara Gordon, Sophie Gruenbaum, Flora Heidingsfelder, Esther E. Heilbut, Auguste Hertzfeld, Emma Hirschberg, Eugen Siegfried Jacobsen, Helene Kaufmann, Helene Liberles, Julia Mayer, Bertha Moses, Rosalie Nachmann, Johanna Nussbaum, Dorette Roos, the couple Jenny and Leopold Seliger, Karoline Strauss and Selma Strauss were killed in the Shoa.