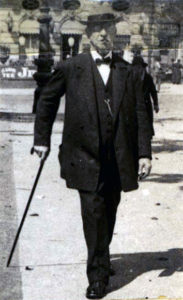 It is thanks to the list of former residents of the former Budge Home, which could be found again by Volker Hütte on behalf of the Budge Foundation (cp. Hütte / Institute for City History), that Karl Falkenstein´s name is not forgotten. Karl Falkenstein was one of 23 residents of Jewish faith who was the victim of the Nazi terrorism and for whom a memorial in front of the new Budge Home at 279 Wilhelmshöher Strasse has been set up since November 9, 2011.

Karl Falkenstein was born the son of Abraham and Betty Falkenstein in Frankfurt am Main on Febrary 12, 1857 (cp. Federal Archive and Yad Vashem).
Around 1869 his father, Abraham Falkenstein, was employed as a “treasury servant” with Frankfurt´s Bank and lived at 11 Jewish Street.
It can be proved that Abraham Falkenstein was a treasury servant with the Jewish health insurance for women around 1880. At the same time he was the “funeral commissioner” of the Jewish community. The tasks of a funeral commissioner can be compared with the ones of a mortician today, though he probably was not an independent businessman, but an employee of the community. At this time, around 1880, he lived, certainly together with his family, at 30 Jewish Market and later 12 Börneplatz. From 1890 Abraham Falkenstein was a man of independent means and lived on the ground floor at 18 Hanauer Landstrasse, subsequently on the second floor at 10 Sandweg. From 1895 he was no longer registered in Frankfurt´s address books; he had probably died.
In 1885 his son Karl Frankenstein, about whom this article is written, appeared for the first time at 30 Jewish Market in the address books. Karl was married to Lea Falkenstein, née Hermann, who was born on April 14, 1862 (cp. Yad Vashem). However, we do not know when exactly they entered into marriage. For the time being nothing is known about their children. The granddaughter of Lea and Karl Falkenstein stored a commemorative sheet for her grandfather at the Holocaust Memorial Yad Vashem. Also in Yad Vashem a commemorative sheet exists for the sister of the granddaughter who was killed in a submarine attack on a ship with Jewish juveniles in 1943.

In 1885 Karl (Carl) is registered as the co-owner of the Sigmund Stern & Co Company. This company was a “branch of the Swiss watch factory Stern in Solothurn and manufacturer of templet-pocket watches and active in the watch trade” (Schmidt 2005). One referred to watches which were cheap in production and manufactured from standardized parts as templet watches. Brand names of the Stern Company were “Erika”, “Kornblume” [cornflower] or “Rheingold” [Rhinegold] (cp. Schmidt 2005). The Stern & Co Company resided on the third floor at 69 Zeil, where also its warehouse was located. Along with Karl Falkenstein there were two further owners: Sigmund Stern and Michael Bamberger.
Karl Falkenstein moved privately several times: in 1886 to 3 Schillerstrasse, from 1887 to 60 Fichardstrasse, third floor. In 1892 he moved to 13 Kaiserstrasse, second floor, where he first opened his own watch shop: “Karl Falkenstein Pocket Watches, Pocket Watches en gros”. A trademark that can be attributed to him is called “Future Karl Falkenstein”. In 1897 the owner and his business moved into the neighboring house at Kaiserstrasse 11, second floor, where they stayed until 1914.

In 1915 you find a proof of Karl Falkenstein and his watch shop at 141 Oestliche [sic] Fürstenbergerstrasse. Not later than one year later he gave up his business and lived as a man of independent weath under the same address from 1916. In 1929 he moved to 12 Wöhlerstrasse, ground floor, a tenement, where also other pensioners resided. A few years later in 1936 Hilde Meyerowitz organized the establishment of a retirement home at 6 Wöhlerstrasse for the “All-German Association of Jewish Provincial Community Organizations” and the Provincial Association of Jewish Welfare. Later the house numbers 8 and 13 were affiliated.
In 1936 Karl Falkenstein moved into a rear building on Niddagaustrasse. After having resided at 18 Rechneigrabenstrasse – Mr and Mrs Falkenstein probably lived here in a retirement home – he and Lea moved into the Henry and Emma Budge Home for single old people at 9 Edingerweg in July 1937. Here Mrs Falkenstein died on June 2, 1938. On February 2, 1939 Mr Falkenstein left the Budge Home before the last Jewish residents had to leave it on April 1, 1939. He then found accommodation at the nurses´ residence of the Association for Jewish Nurses of Frankfurt am Main at 85 Bornheimer Landwehr (cp. “Hausstandsbuch 665:60” [record kept by the local police stations that listed Frankfurt´s residents sorted by street and house number]). Then he must have lived at 11 Beethovenstrasse, which is listed in the “Hausstandsbuch” of the hospital of the Jewish community. Later he used to live there from October 31, 1941 (cp. “Hausstandsbuch” 686/687). The circumstances in the hospital Karl Falkenstein experienced, aged 84 now, were described by the nurse Thea Höchster in a letter at the end of October 1941: “We have a lot to do here in hospital. All beds are occupied, and some beds even have been additionally pushed into the rooms. Our poor people are not up to these difficult days. How many children have to leave their homes and good old parents at this time? As long as we can and may care for them, they cope with their fate easier. In addition to their physical infirmity they are definitely suffering also emotionally so that it is for us a sad workplace. Our mood is depressed, as many of our best friends are leaving” (Thea Höchster, quoted by Kingreen 1999a: 147).
Karl Falkenstein was “evacuated” from the hospital at 36 Gagernstrasse by the Gestapo [sic] on August 18, 1942 (cp. “Hausstandsbuch” 687: 82. At the age of 85 years he was sent with the seventh large deportation from Frankfurt with transport XII/1, train Da503, from Frankfurt am Main to Theresienstadt transit and concentration camp (cp. Yad Vashem; Kárný 2000).
In this deportation, which affected 1,020 people, 678 patients from Frankfurt´s retirement homes were carried away. According to a list of “Home Purchase Contracts because of Change of Residence on August 18, 1942” most of the displaced people were wealthy. The state could take expropriated funds from 270 persons to the amount of six million Reichmarks by these contracts (cp. Kingreen 1999b: 376). In accordance with the Compensation Act, Karl Falkenstein had to make a compulsory payment in the course of the “seizure of Jewish assets” to the amount of 4,750.77 Reichmarks and further 8,633 Reichmarks for the forced conclusion of a “Home Purchase Contract” (cp. Museum Jewish Street Frankfurt am Main). These contracts led old people to believe that their retirement in a retirement home would be financed (cp. Museum Jewish Street Frankfurt am Main). A pattern of such a contract is shown here.

Rosa Natt-Fuchs, aged 78, who came from the retirement home at 25 Niedenau and was deported in the same train as Karl Falkenstein, described the order of events in a farewell letter on Thursday 13, August 1942. She wrote she had to be ready on Saturday evening and to leave on Sunday. After an overnight stay in Rechneigraben [probably the retirement home there which served as collection center] she was to go to Theresienstadt on Monday (cp. Rosa Natt-Fuchs by Kingreen 1999b: 376). A witness to the deportation preparations was Tilly Cahn who wrote in her diary on Sunday August 16, 1942: “Sunday she was first seen by Max, then two times by me [probably the mother of husband Max L. Cahn is meant] in the retirement home [Feuerbachtstrasse 14, corner Guiollettstrasse], a heartbreaking tragedy, all the old, mainly infirm people, dressed three times, one suitcase, one lunchbox… Sunday afternoon the old people were set on trucks or wagons, one after the other, and partly taken to the collection center on Hermesweg or to the retirement home on Rechneigraben with their luggage. […] There they slept two nights, in very crowded conditions, on mattresses before they were prepared for transportation by the Gestapo. We were not allowed to see them again, although I tried yesterday by speaking to the SS at the gate. […] Now, on Tuesday, August 18 between 5-6 p.m. the train to Theresienstadt is probably leaving. I am feeling terrible and it will not let me go… Also patients of the infirmary ward of the hospital, who are severely ill came with them” (Cahn 1999: 218 et seq.). One of the patients from hospital was Karl Falkenstein.
The deportation from August 18, 1942 reached Theresienstadt on August 19, 1942.
Two years later, on July 21, 1944, Rabbi Leopold Neuhaus, who was also interned in Theresienstadt, compiled statistics of these people deported from Frankfurt. In accordance with these statistics there were 44 persons of originally 1,020 deported people still living in Theresienstadt. “During the last two years 588 people died of starvation, exhaustion and disease, 328 people were deported to the extermination camps in Treblinka and Auschwitz. Only 18 individuals of the more than 1,000 people deported from Frankfurt experienced the liberation.” (Report of Theresienstadt´s Initiative in Prague, quoted by Kingreen 1999b: 377).
Karl Falkenstein died in Theresienstadt on September 24, 1942 (cp. memorial book, Koblenz Federal Archive).