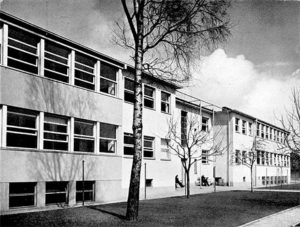 On October 11, 1874 a “stately” procession of Rödelheim citizens moved from the town hall to the new hospital and almshouse. The house was located “in the continuation of Alexander Street to the right” (Trümpert 1881: 39). The head of the district authority Rath from Wiesbaden and Frankfurt´s police president Hergenhahn were on the ground. The Catholic pastor Hungari and his Protestant colleague Trümpert held ordination speeches for which they were paid by the founders of the houses Julius and Arthur May (cp. Trümpert 1881: 39). The May brothers and to a lesser extent Recha Seligstein, one of Julius´and Arthur´s sisters, with her husband Samuel had given the hospital and almshouse to the value of 18,000 Guilders (cp. Lustiger 1988: 147) to the Municipal of Rödelheim.
The donation agreement is dated May 20, 1874 and begins with the words: “Since the Municipal of Rödelheim had often felt the need of a hospital and almshouse, where needy people are cared for, the gentlemen Julius May and Arthur May have had a dwelling being suitable for medical care and poor relief, of which you find a ground plan in the enclosure, built at their own expense in Frankfurt am Main on their assigned properties of Rödelheim´s boundary cadastral section 7 No. 137.6 138.3 139.3 140.3 141.3 & 142 to the memory of their deceased parents, Mr Jos. Hirsch May and his wife Hannchen née Mayer.” The individual points in the contract are listed in the following document. The contract is signed by the donors, for the Municipal of Rödelheim by Mayor Müller and his municipal councilors and for the Executive Board of the Jewish community by Josef Neumann, J. Lehrberger, B.J. Schott, M. Ehrmann und S.M. Mandelbaum (cp. ISG Ffm: magistrate records V 339: 1-3).

For the year 1897 it is possible to reconstruct the Executive Board of the hospital from Rödelheim´s address book: The Christian Executive Board consisted of Mayor Stubberg, the physician Dr. Hermann Momberger, who was in charge of the medical care in Rödelheim´s hospital, the chemical manufacturer Franz Schulz and Wilhelm Schmidt, who ran a dry-cleaning company for bedsprings. The Jewish Executive Board consisted of the book print shop owner Mayer Lehrberger, the merchant Simon Mandelbaum and the butcher Leopold Fleisch (cp. Dippel 1995).

Rödelheim´s incorporation into Frankfurt
In the course of the incorporation of Rödelheim into the City of Frankfurt am Main in 1910 the hospital changed over to the city hospital, while the Jewish community remained independent (see Lustiger 1988: 147). In accordance with a magistrate decision the board was chaired by the chairman of the institute deputation, the administration of the hospitals and almshouses of the City of Frankfurt am Main (cp. ISG Ffm: magistrate records V 339: 1).

The conversion to a nursing home
In 1922 the institute deputation requested the magistrate to set up Rödelheim´s hospital as infirmary. The need for accommodation of severely ill patients had increased, and Rödelheim´s hospital was considered to be suitable for this, because its 31 beds were not all occupied by Rödelheim´s citizens and the foundation purpose “for medical care and poor relief” would not be affected by this change. The application was approved under the conditions that residents of the Rödelheim district were given preferential accommodation, that the hospital care could be re-established if necessary and that the staff would be taken on (cp. ISG Ffm: magistrate records V 339: March 17, 1922).

A dispute between the chairman of Rödelheim´s Jewish cultural community Heinrich Hammel and the magistrate shows that the consequences from the conversion to an infirmary were not really clear. In 1924 Heinrich Hammel had admitted the diseased warden of the synagogue to the Jewish hospital on Gagernstrasse and was of the opinion that he should be treated free of charge, since due to the conversion to an infirmary there were no patient beds available which shall be provided by the city. He probably justified this by §4 of the donation agreement which governed the special use by Jewish unemployables. However, the magistrate did not share this opinion, as it was not a matter of unemployability, but illness. Nevertheless he did not want to insist on the care expenses being reimbursed as a gesture of goodwill (cp. ISG Ffm: magistrate records V 339: 36-37).

§6 of the donation deed of 1874 provided that “a prayer room for the Jewish worship service has to be reserved” in the hospital and almshouse (ISG Ffm: magistrate records V 339: 1-3). According to Arthur Hammel, the son of the last church warden of Rödelheim´s Jewish community, Heinrich Hammel, the prayer room still existed in 1933: “Jews who had died in hospital were laid out in this room and taken from here to the grave on the cemetery of Rödelheim, Westhausen” (Dippel 1995).

n March 1997 Frankfurt´s registered association for old-age welfare service requested the legal office of the foundation department to allow the use of the prayer room for “better purposes”, i.e. care purposes, due to a great shortage of space. Additionally, the room would be almost vacant throughout the year and only used by a few people. “It must be added that these few people as Jews are no members of the German national community, while the home is solely occupied by German national comrades” (ISG Ffm: Foundation Department 311-312: April 23, 1937). The approval for the conversion of the prayer room was based on the grounds that the original use may only be demanded by the heirs of the donors, who, however, were not alive anymore [which is incorrect, see article: “The Founding May Family” (being prepared) of the author]. Additionally, there was no public interest in the original use. The report of the foundation department of the legal office dated April 23, 1937 states: “Practically, the situation is that the chairman of the Jewish cultural community, Heinrich Hammel […] holds a worship service of about 30 minutes, one each in February and August, in this room together with 8-9 community members. The original prayer room has long-fallen victim to the rebuilding. A spare room has been set up in one of the wings. […] It had been suggested that the Jews hold these two remembrance ceremonies in Rödelheim´s synagogue, which, however, they did not want to accept.” It is further stated that also other benefits for Jews having been defined in the foundation deed (occupation of at least four rooms in the almshouse with Jews and right to ritual meals) seemed to have been given up in 1922 at the latest, when the hospital was converted to an infirmary. It is emphasized that the earlier Jewish influences on the home or its management and administration had been “completely eliminated” in the meantime (cp. ISG Ffm: Foundation Department 311-312: April 23, 1937).

Gift or donation and the consequences

As the different documents mention both gift and donation, the legal office of the foundation department of the City of Frankfurt tried to clarify the issue in 1941. It was determined that the Joseph and Hannchen May Foundation being referred to as foundation was a donation of the May brothers. Additionally, it was clarified that two further transfers were also donations: On the one hand 10,000 Marks given by Arthur May to Rödelheim´s Jewish cultural community in May 1886 for the Easter feeding of poor Jews (Lustiger 1988: 28) and 12,000 Marks given by Julius May to Rödelheim´s Jewish community in May 1891 for the support of poor people. In the documents of the Municipal of Rödelheim both amounts were referred to as bank transfers to the Josef and Hannchen May Foundation, as both were gifts. However, since state supervision was missing, it was not possible to call it a donation (cp. ISG Ffm: Foundation Department 311-312: March 12, 1941). By the classification as a gift it became easier to handle the purpose of the gift arbitrarily.

Post-war period
Another rebuilding was done in the 1950s. This was also planned for the 1970s, but the building turned out to be now completely obsolete so that it was pulled down in 1983. The new building was inaugurated in 1987 (cp. ISG Ffm: Welfare Office 3,944).
The current owner of the Social and Rehabilitation Center West in Rödelheim, the registered Frankfurt Association, draws attention to the origins of the home by a small exhibition (as of 2012), which has been composed by Rödelheim´s former Protestant pastor Heinrich Dippel and has limited access. This article shall support the memory of Joseph and Hannchen May in the spirt their children wished.