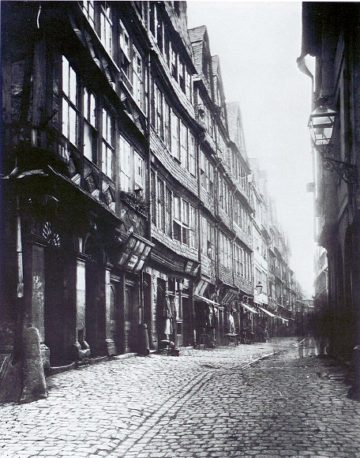 The Establishment of the Ghettos
In Frankfurt on Main Jewish residents were mentioned in official documents as early as 1074 (Mayer 1966, page 9). The Pogroms of 1241 and 1349 destroyed the first Jewish communities. After returning to settle in the city again, the Jewish residents continued to live without protection, legally discriminated against and constantly threatened by Christian anti-Jewish sentiment whose goal was expulsion of the Jews. There was, however, no prohibition against Jews moving into predominantly Christian areas of the city, and there were Christian citizens of Frankfurt who lived in the Jewish quarters. How Jewish nursing was organised during this time is largely unknown, although there was no strict separation so that, in case of need, Jews could be cared for by Christians and Christians by Jews. Jewish doctors were already caring for Christian patients in the 14th century. Such forms of co-existence (see, however, Grebner 2009) ended abruptly in 1460 (over one hundred years after the last pogrom) when the Frankfurt City Council ordered the establishment of a Jewish ghetto (for background on the reasons, see Backhaus et al. 2006). Two years later Jewish families had to leave their homes and were forced to live in the ghetto. We can learn more about this period from the online databank of the Jewish Museum Judengasse in Frankfurt on Main. “Judengasse, the Frankfurt Jewish ghetto, was located in what is now the eastern section of the city center. It started at Konstablerwache, ran along the Staufenmauer and stretched beyond the current Kurt-Schumacher-Street up to the area where the municipal services’ building currently stands. Judengasse was enclosed by walls and was, therefore, separated from the rest of the city. There were gates at the northern and southern ends of the ghetto, as well as in the middle, on the westside facing the city center, at the so-called Judenbrückchen. These gates were closed every night, as well as on Sundays and holidays; Jews could only leave their narrow streets on workdays.” Frankfurt’s Judengasse, „the first ghetto in Germany and one of the first in Europe“ (introduction in Backhaus et al 2006, page 10) physically separated the Jewish minority from the Christian majority. At the same time, the walls offered the Jewish inhabitants no protection. During the Milk-fat Uprising in 1614, anti-semitic attackers broke into the Judengasse, forcing the inhabitants out and plundering their houses.

Hospitals
Only the forcible establishment of the Jewish ghetto led to separate Jewish hospitals which would endure across several centuries. The first Jewish hospital, the Hekdesch (or in new Hebrew “Hakdesch”, also called “Heckhaus”), a house “consecrated” to the poor and sick, was one of the oldest houses in the Frankfurt Jewish ghetto; it was built in 1462 on the land that is now the Konstablerwache. As a so-called „stranger’s hospital,“ it took in the poor and sick who came from outside the city, and therefore – in contrast with the inhabitants of Judengasse – had no rights to residency (Judenstättigkeit) in the city. At the beginning of the 18th century a couple, who themselves lived along with their child in the Heckdesch, cared for about 15 patients. After a large fire, the facility was re-located in 1711 from the Judengasse to the property of the Jewish Cemetery and the neighbouring Völkerschen Bleichgartens; the hospital for sick residents of the Judengasse was also re-located to the same area (Building 102 in the ghetto, opening date unknown). Since 1535 the third nursing institution had existed at this location, the so-called Blatternhaus (Blattern = smallpox) which treated patients with contagious diseases. The hospital for residents of the Judengasse and the Blatternhaus were probably connected in the same century; the single-story building with a little synagogue and a little apartment for the “orderly” were located on the same property where the Börneplatz Synagogue was later built (1882). The former “stranger’s hospital”, the Heckdesch, was given a new location comprising 6 small houses in 1718; this institution existed until it was destroyed by air raids during World War II.

Nursing
The sick and those needing care in the institutions in the Jewish ghetto were attended to by so-called orderlies for the sick. Due to the separation between care of males and females, there were also female orderlies. The orderlies were regarded as low employees of the Jewish Community and, as such, received low wages and lived in simple houses near the hospitals. The administration of the nursing facilities was conducted by an unpaid volunteer known as the hospital master, a person who had a high reputation within the Jewish community administration. Coming from wealthy families, this position gave the person the opportunity to fulfill the religious obligation to perform charity deeds (“Zedaka”). Due to the population growth, among other reasons, the need for nursing care in the Judengasse increased in the 16th century. Since then, in addition to the orderlies for the sick, a “Heckdeschverwalter” or “Hekdeschmann,” was responsible for direct patient care. This man, a sort of head nurse, led the hospital through living directly in the facility. Since the 17th century, the Jewish community continuously employed two doctors; they were instructed to follow these guidelines: fees were set for the treatment of wealthy patients – the poor were treated for free. Jewish doctors, both male and female, were so well respected from the Middle Ages onward, that they were consulted by Christians patients far beyond the ghetto walls. From 1631 to 1640 the renowned doctor and scholar Dr. Josef Salomo del Medigo (also known as Joseph Solomon Delmedigo) (1591 – 1655) worked as a community doctor in the Frankfurt Jewish ghetto; he was followed in 1640 by his student and son-in-law Zalmann Bingen (dates of his birth and death unknown).

“back out of the ghetto…”
In 1796 the Jewish ghetto burned down yet again, this time due to the fire of the French troops. The homeless residents were put up outside the ghetto. Although the Frankfurt city government was not able to push through legislation to rebuild the ghetto, the ghetto ordinance was not formally rescinded until 1811. After further conflicts with the Frankfurt City Council Jewish were allowed – after more than three hundred years! – to live wherever they chose in the city. Beginning in the midst of the 19th century, wealthy Jewish families increasingly settled in the Frankfurt Westend, whereas the poorer returned to the area of the former Jewish ghetto which had been torn down at the end of the 1880’s. In the year 1835 Judengasse was renamed after the political author and journalist Ludwig Börne (1786 – 1837), known at the time as Juda Löw Baruch, who had been born in the ghetto; thereafter the street was called Börnestraße. The long emprisonment was over, the way for emanicipation was free. The legal equality of Jewish and Christian citizens of Frankfurt in the year 1864 (followed in 1870/1871 throughout the newly founded German Empire) provided the impetus for the founding of modern Jewish hospitals in Frankfurt on Main; these institutions opened their doors to patients of all confessions and carried on the tradition of Jewish nursing which had begun under ghetto conditions.