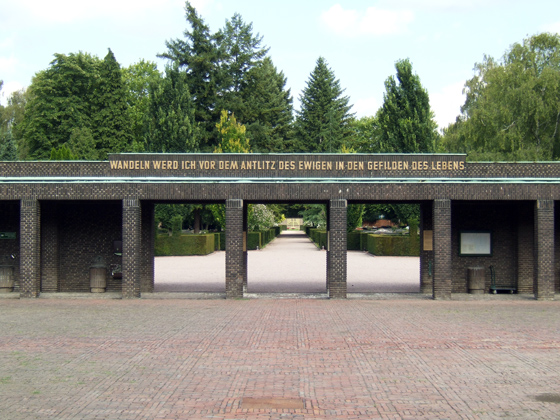 About 800 grave stones in the newer cemetery of Frankfurt´s Jewish community on Eckenheimer Landstrasse are evidence of persons who were victims of anti-Semitic persecution, who escaped from Nazi persecution and deportation in the years 1938 to 1943 by suicide. They are impressive witnesses of these tragic historical events (http://www.jg-ffm.de/de/religioeses-leben/juedische-friedhoefe, call of all links on October 24, 2017). It was painstaking work for the chronicler and survivor of the Shoah Adolf Diamant (1924-2008) to collect their names (cp. Adolf Diamant 1983). Among them are also two nurses of the former Jewish hospital on Gagernstrasse: Bertha Schönfeld and Thekla Dinkelspühler, both born in Hesse. Where were they from, how did they live?

Origin
Sister Bertha came from the rural Jewish life in the middle of Hesse (north of Frankfurt am Main). Born on September 13, 1883 at 8:00 in her parents´ flat in the Kesselbach village (now part of Rabenau, Gießen District) she was, as it was customary in the country at that time, a “home birth“ (OuSt Rabenau). At this time about seven Jewish families (approx. 30 people) lived in Kesselbach who were members of the synagogue community in the larger neighboring village Londorf. The female Jewish citizens of Kesselbach were known for their special commitment to voluntary nursing. They cared for fellow believers in surrounding villages and possibly also Christian neighbours: “[…] Thus, local women met and established a female-Chebra, whose activity is focused on supporting needy people in case of illness and bereavements” (“Der Israelit” dated April 1, 1889, quoted by http://www.alemannia-judaica.de/londorf_synagoge.htm). Being usually excluded from manual and agricultural occupations, Kesselbach´s Jewish citizens mainly worked “as cattle dealers, butchers or retail merchants”; they all lived like their Christian neighbors “in humble circumstances” (quoted by ibid.). Bertha Schönfeld´s parents were:

Bertha Schönfeld was the second-born of six children whose life data could be partly reconstructed:

Bertha Schönfeld and her siblings probably went to the Jewish school in Londorf, where there was also a synagogue and the Jewish cemetery. There were not many job prospects for Jewish girls in the country nor suitable candidates for marriage either. As far as Bertha Schönfeld was concerned, she thought it important to be independent (cp. Levinsohn-Wolf 1996: 27). Having come of age at 21 years in September 1904, she left her home village and headed for Frankfurt am Main city in order to qualify as a nurse with the nationally respected Association for Jewish Nurses.

Since February 3, 1934 Bertha Schönfeld was registered at 82 Waldschmidtstrasse (ISG Ffm: HB 686: 56).
Why she had been living outside of the hospital and nurses´ house for several years during the Nazi era is unknown. Did she, despite own health problems, provide private care again? Did she support any relatives? Perhaps she had already become a pensioner and moved into a flat of her own although she was entitled to a retirement residence in Frankfurt´s Jewish nurses´ house. Later, she lived on 27 Hanauer Landstrasse. When Bertha Schönfeld returned to the nurses´ house – possibly under the impression of the November pogrom and its aftermath – on December 5, 1938, she was registered in the files as “retired nurse” (ISG Ffm: HB 655: 59). Since January 1, 1939, she had to use the additional name “Sara” (men: “Israel”) in order to comply with the forced change of surnames and given names by the national socialists. On February 5, 1939 an ill personal stroke of fate afflicted her: Her older sister Rebekka Fuld committed suicide aged 57 in Frankfurt am Main (Yad Vashem: database, commemorative sheet). Bertha Schönfeld´s brother-in-law August Fuld (born in Wolfenhausen on January 11, 1982) – decorator, upholsterer and owner of the upholstery room “A. Fuld” which had been destroyed during the November pogrom in 1938 (Jewish museum Frankfurt am Main: internal database) – had returned from Buchenwald concentration camp before and fought his way through as an unskilled worker. On November 11, 1941 he was deported from Frankfurt to Minsk (Belarus) and declared dead later. Bertha´s youngest sister Johanna Singer – she had married and moved to Saxony-Anhalt – was displaced from Magdeburg along with Felix Senger (born on July 23, 1882 in Ueckermünde/Pomerania) and Friedrich Senger (born in Bernburg on July 14, 1925), probably her husband and son, to the Warsaw ghetto, where their traces disappeared.
On November 19, 1940 Bertha Schönfeld was expelled from her retirement residence by the national socialists´ forced eviction of the nurses´ house. She had to move talong with her female colleagues to Gagernstrasse Hospital (ISG Ffm: HB 655: 59). How the last months passed is unknown. However, in view of the high fluctuation of the medical and nursing staff by emigration (e.g. head nurse Rosa Spiero, her former opponent, on March 24, 1941) and the eviction of Jewish institutions on Röderbergweg (Gumpertz´ infirmary, Rothschild´s Hospital and Rothschild´s Children´s Hospital) in 1941 she understood that Gagernstrasse Hospital was also in dissolution. Frankfurt´s last remaining Jewish hospital, a refuge for sick, old and people seeking help due to anti-Semitic persecution, was completely crowded and misused as a NS-collection center prior to the deportations. On June 29, 1941 Bertha Schönfeld departed from life by poison (ISG Ffm: HB 687: 326) – aged 57 like her sister Rebekka. Thea Levinsohn-Wolf (1996: 27) writes: “Sister Bertha had decided to live her life in her own way and to end it, if necessary. She took her life in order not to have to endure the ignominy of deportation.”
The suicide of victims of persecution by the Nazi regime is differently interpreted in research (cp. e.g. Fischer (Hg.) 2007; Goeschel 2011): Was it an “act of desperation”, a last “emergency exit”, a deliberate “escape that can imply an active act of resistance” (Ohnhäuser 2010: 23)? For the Nazi perpetrators the suicide of a victim obviously was a kind of defeat, because the people concerned evaded their totalitarian control; “In the second half of the Nazi regime the rulers sought to have absolute control over the power of decision regarding life and death of their chosen opponents” (ibid.: 24). The catalogue of the German National Library in Leipzig lists two dissertations at the medical faculty of Wien University for 1942: “Suicide, with special consideration of the Jews” (Wolfgang Damus) and – in Nazi jargon – “Suicide among Jews and Jewish mongrels” (Hans Kallenbach).
Tim Ohnhäuser additionally points out in his study on Berlin´s internal specialist a.o. Prof. Dr. med. Arthur Nicolaier (born in 1862), who committed suicide in 1942, that he had long suffered the “social death” of the Jewish German people that had been determined selected by the Nazis, that of being excluded from everyday life. The second “social death” overtook Dr. Nicolaier after the Nazi era by “Forgetting as part of the extermination” (Ohnhäuser 2010: 31). For a long time hardly anyone remembered the discoverer of the tetanus pathogen who significantly contributed to the fight against tetanus.Also Bertha Schönefeld, whose nursing care benefited many Jewish and non-Jewish patients, is forgotten today. Like her sister Rebekka Fuld she was buried in the Jewish cemetery on Eckenheimer Landstrasse; the entry in the grave directory is “Berta Schonfeld”.

Unlike Bertha Schönfeld, Thekla Dinkelspühler was not a nurse from vocation but from need: Aged 38 she started her career as a student nurse under the repressive conditions of the Nazi era at Gagernstrasse Hospital. While sister Bertha came from a little Hessian village and spoke “Frankfurt´s real dialect” (Levinsohn-Wolf 1996: 28), sister Thekla was influenced by the urban environment and had grown up in a medium-sized business household.
On June 4, 1904 Thekla Dinkelspühler was born together with her younger twin sister Luise (also Louise; documentary Louisa) in her parents´ flat at 34 Louisenstrasse in the South Hessian spa town Homburg vor der Höhe (Bad Homburg since 1912). They were the youngest daughters of the merchant Moritz Dinkelspühler (November 1, 1856 in Fürth – May 1, 1917 [Bad Homburg v.d.H.] and his wife Klara (Clara) née Eichenberg (October 20, 1867 Bad Homburg – May 30, 1934 [Bad Homburg v.d.H.]); the surname Dinkelspühler probably derived from the Bavarian-Central Franconian imperial city Dinkelsbühl. Thekla and Luise had three sister:

Her twin sister Luise Dinkelspühler could take refuge in the United States in April 1937. Until being dismissed due to Nazi policy, she had been employed as a clerk and stenographer in Bad Homburg and also worked in a “Zwieback” (rusk) factory in nearby Friedrichsdorf/Ts. In New York she took up a job as a nurse: in 1941 at hospital, in 1946 as a private nurse (Hessian State Archives).

Moritz Dinkelspühler had married into the manufactured goods business Lehmann & Eichenberg at 23 Louisenstrasse. He was a member of the respected Talmud-Thora-Club (cp. Grosche 1991: 29). After his death (1917) his widow Klara Dinkelspühler continued the business for textiles, fabrics, yarns and men´s underwear (ibid.: 44). She died in 1934. One year before, on April 1, she had experienced the state-organized Nazi boycott of Jewish companies. It still has to be checked in more detail whether the house at 23 Louisenstrasse was owned by a non-Jewish coal merchant before or after the “Aryanization”. In the 1930s Thekla Dinkelspühler lived with one of her sisters (probably Luise) on the second floor for rent (ibid: 79). Business and inheritance were gone, which was why her twin sister, the only survivor, fought for compensation (“reparations”) (Wiesbaden Household, Court and State Archives). When the November pogrom was taking place in Bad Homburg, in plain daylight in front of everyone, their flat was not spared. During a trial initiated after the war, a person involved reported: “I met the Dinkelspühler sisters on the first stairs leading to the top. Then I went up to the second floor […], where several people were busy with the demolition of the home furnishings. […] I want to state that I prevented one of the men from pocketing some pieces of toilet soap” (quoted by Grosche 1991: 79). Witnesses accused the NS perpetrator of “having been very much actively involved in the destruction of the home furnishings in the flat of the Dinkelspühler sisters”, where he even “intended to smash the bath” (hearing of offender, quoted by ibid.: 80).
On April 30, 1939 the Nazi regime abolished the rent control for all people it had classified as Jews. Also Thekla Dinkelspühler was threatened by compulsory admission to a ghetto house (“Jews House”). She possible tried to leave Nazi Germany in vain. She used the remaining options for action and left her native town to go to Frankfurt am Main. On August 14, 1939 Frankfurt´s Jewish Nurses´ Association accepted her as a student nurse (ISG Ffm: HB 655: 64). It is not known, whether she already had any care experience. Like Bertha Schönfeld, she lived in the nurse´ house and was also affected by the forced relocation to Gagernstrasse Hospital on November 19, 1940 (cp. ibid.), where she participated in the care of the sick and elderly, which was done under increasingly difficult conditions due to growing Nazi repressions. She was certainly informed about sister Bertha´s suicide in June 1941.


Thekla Dinkelspühler also committed suicide in Gagernstrasse Hospital on May 22, 1941 (ISG Ffm: HB 687, Page 48). She was only 40 years old. Just two days later another big deportation took place from Frankfurt to Poland, this time to Majdanek or to Izbica transit camp, from which no one returned. Unlike those murdered in the Shoah, sister Thekla got her own grave in the Jewish cemetery on Eckenheimer Landstrasse. Autobiographical sources like letters or diaries have not been passed down, neither by Bertha Schönfeld nor by Thekla Dinkelspühler. They are considered to be lost. Thus, this article can only be an approach to their biographies.