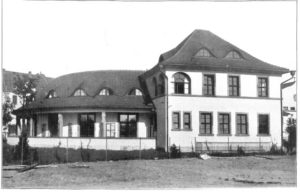 Diphtheria and its treatment in the 20th century
Spread of diphtheria in Germany and Frankfurt am Main before 1945
In the 19th century diphtheria, which is passed on by airborne infection, was one of the “major killers” of children (Süß 2003: 215). Emil von Behring developed a vaccine against the epidemic disease which, however, was initially expensive and unreliable. In the 1920s, the last big wave of the disease came in bouts and appeared in regional epidemic centers from Scandinavia to Germany. About 30,000 people were afflicted in 1926, about 150,000 in 1938 and about 300,000 in 1943. The Second World War favored the spread, since the defenses of the population were weak and many people were often crowded in small rooms, such as air raid shelters.
In Frankfurt am Main the numbers of 783 diphtheria patients in 1930 and 1,703 in 1940 represented the peak of the disease. According to statistics, 50 diseased died in 1930 and at least 64 in 1940. In 1948 the Hanau physician Friedrich Blendin described different factors which influenced diphtheria in Frankfurt am Main. He found no great difference in disease incidence determined by gender. From the seasonal point of view, Blendin could register a considerable increase of cases in late autumn and winter which could be due to gathering because of the low temperatures or an increased virulence of the pathogenic agents. Regarding the statistical distribution in age groups, Blendin determined that in the years 1925 to 1927 infants aged between 0 and 5 years made up about one third of the cases and, consequently, represented the largest proportion of the diseased. After that, the largest group affected by the disease was the 5- to 10-year olds.

Isolation to combat diphtheria
There were various actions to combat epidemics of which the most important was isolation. In 1899 the Straßburg scientists Ernst Levy and Sidney Wolf pointed out that, even in the Hebrew Bible, the Mosaic Law called for the isolation of persons with infectious diseases. Robert Koch described the isolation of diseased and family members who were suspected of being ill or hospital patients as “the best and most effective weapon in the fight against infectious diseases” (Süß 2003: 217). The Law on Infectious Diseases of the German Reich of 30th June 1900 legally required the confinement to isolation which signified an infringement of personal freedom.
The need for isolation was taken into account when erecting new buildings within the Jewish hospital system. In 1914 the hospital of the Jewish Frankfurt am Main community on Königswarter Strasse had become too small so that a bigger hospital complex was built on Gagernstrasse. The new hospital had its own infection building for its patients. It formed a semi-circle, had a bed hall on the ground floor situated in front and “verandas like day rooms” (Hanauer 1914: 65) on the upper floor of the bed hall. Separate lock systems were set up as entrances for physicians and patients. Each of the four departments of the infection building had a nurses´ station with a special bathroom and further side rooms, such as a small kitchen, toilet, children´s toilet and sink. The doors had flaps through which it was possible to observe the patients without having to enter the rooms. The walls were painted with oil paint or limed to make cleaning as easy as possible. Dirty laundry could slide through a tube system into disinfectant solution. There was also a small laboratory (cp. Hanauer 1914).

Also in 1914 the Frankfurt association for Jewish nurses erected a new nurses´ home on Bornheimer Landwehr next to the hospital where two separate rooms had been set up to meet the requirements of isolation of the nursing staff. Each of the rooms was provided with its own gas stove, bathroom, toilet and house phone. This was how the risk of infection for the other nurses was controlled, and the nurses who were carng for the isolation department remained undisturbed in their working patterns.

Care situation
In 1932 F. O. Höring, the tropical disease specialist and later senior consultant of infectiology at the Charité in Berlin, described particular difficulties to which the nursing staff was exposed on isolation wards. Since the patients with infectious diseases were often very sick, but recovered quickly and yet had to continue to live in isolation, they felt cramped. The only contact person was the nurse, who gave both closeness and distance, as she could fulfill wishes and make contact to relatives, but also paid attention to the compliance with the instructions, such as visiting bans and disinfection measures for excreta, utensils and clothes. Distance was intensified by the avoidance of physical contact. “The nurse is permanently sending both signals of affection and rejection.” (Höring 1952:10). Another problem Höring saw was that caring persons who had worked on the ward for a long time, “often turn out to be rough on the outside” (Höring 1952: 10). However, especially due to the periods of time working on the ward, they gained vast experience and were able to recognize typical symptoms and complications of certain diseases at an early stage. The endangerment to the nursing staff resulting from diphtheria was that they could get infected repeatedly without getting sick, which was why they needed to be constantly tested for new bacteria. In summary, Höring stated “that the care of toxic diphtheria cases probably requires the highest commitment from the nurse while permanently and attentively observing especially the [patient´s] circulation and also demanding their own ability to undertake rapid therapeutic intervention.” (Höring 1952: 11)

Edgar Sarton-Saretzki: A patient refers to the year 1933
Edgar Sarton-Saretzki, born on 10th of May, 1922, in Limburg on the Lahn, was diagnosed with diphtheria when he was 11 years old. ; he also experienced the care situation described above and had to stay in the infection building of the hospital of the Jewish community on Gagernstrasse for a long time. He intensively remembers the constraints of the ward which he as a child felt particularly strongly after the disease had subsided: “When I was 11 or 12 years old, I was diagnosed with diphtheria, and I was in the isolation hospital, on the isolation ward. With diphtheria you had to have three swabs taken; I used to have two swabs (which were negative) taken, and the third one was always positive, which meant that we had to start over from the beginning, even though I was in perfect health.” Edgar Sarton-Saretzki felt completely healthy and was, therefore, “hard to control”, as he says. He remembers trying to kill time: “There was a wall I climbed up. – I can´t remember how I managed to do that because everything was protected, and people could not come near directly. When my parents were visiting me, they had to stay, for example, behind a barbed wire. Once I climbed up the wall, and behind the wall – what was there? There were coffins. It was where the people who had died were dumped in coffins. And the ward doctor, a Dr. Reiter, he caught me. He was incredibly furious, and I had to go to bed for a week, I was not allowed to get up. He was very, very upset that I had seen that. It was completely hidden, in the back of the corner, and I was severely punished. That was just the problem with diphtheria – you had to have these three swabs taken.” However, despite of punishments and isolation, Edgar Sarton-Saretzki couldn’t be completely stopped: “I remember being completely isolated for weeks, totally isolated. There was a girl next to me, Marion David, with whom I later went to the stadium pool for swimming;: I talked with her which wasn´t allowed either. There was a barrier, but you could support yourself and look around, but you had to watch out that you were not caught.”

Mr Sarton-Saretzki recognizes the isolation ward on the above photo and points out specific aspects of the picture: “Yes, yes, that´s where you stayed in. There was a separate veranda, and then there was a passage here, which was also separated; my parents visited me, they had to shout so that I could hear them. The wall I climbed up – I can´t remember where it was. I can´t recall how long I had been there either, but it was quite a long time.” Another moment that retained in his memory was when he got an injection. “That was not an easy thing, diphtheria, at that time. I got such an injection [shows about 25 cm] – such an injection – that was quite a lot of trouble, because diphtheria used to be a severe disease with high fever at that time. And today I remember that it was a horse serum, it was from a horse.”
Today you still realize his outrage about the hopeless situation when he says: “What a kind of psychology, where they´ve thought, you’ve to be completely paralyzed, you may not do anything at all. You weren´t allowed to speak to anybody at all. That´s completely impossible for a child, but that was what they´ve practiced. So they were just interested in you having no contact to anybody, they were afraid of diphtheria spreading.” Asked about everyday life, for example, the distribution of meals, he states: “I can´t remember how I got my meals, the meals were delivered to me, but I can´t remember how, whether they´ve pushed them to me or something like that, but there were just a few people who were allowed to have contact. I think, they were only people who had been specially designated for that. ” Mr Sarton-Saretzki added summing up: “They´ve treated all equally, I think, no matter if child or adult.”

1Still today the immunoglobulins, which are necessary for the treatment of diphtheria, are extracted from horse serum as source material.